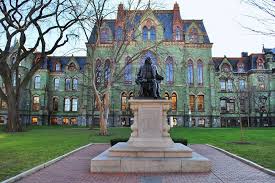 Today’s tour is my alma mater, Penn. Full disclosure: It’s hard for me to be objective with this tour because I just love this school so much. If you are looking for a highly selective school that doesn’t take itself as seriously as some of its Ivy League peers, Penn is worth considering. Penn’s campus is located in what is now called “University City” in Philadelphia; the campus is self-contained but downtown Philadelphia is easily accessible. One of the things I love about Penn’s campus is that it truly is a campus. It’s rare to see the kind of set up Penn has at other urban colleges. Locust Walk is the main artery of campus and it’s tree lined walk ways and are full of buildings with varied architecture styles. Penn has just under 10,000 undergrads.

The undergraduate schools consist of the College of Arts and Sciences, nursing, engineering and business (Wharton). There are prestigious cross disciplinary majors including management and technology in between schools and the most popular majors are business, economics, engineering, nursing, finance, anthropology, and cognitive science. About 70% of classes have fewer than 20 students. Even though Penn has many pre-professional tracks, the heart and soul of the school is in the College of Arts and Sciences. Students in the College have varied areas of study that are required and all students have to take a foreign language. While professors are serious and have research responsibilities outside of class, they are accessible and accommodating when it comes to students.

Penn is a work hard, play hard environment. Students say it is competitive, but also fun. While the school is very competitive, it doesn’t have the same intensity of many other Ivy League schools. The school prides itself on its service to the community. Ben Franklin, Penn’s founder said that service to humanity is the “great aim and end of all learning”. Students are involved in community service around the Penn community, and the school is also a national leader in service learning and research.

Like most selective schools, students come from all over the country and world to attend Penn. 50% of students live on campus. The coveted Quad houses a portion of freshmen. About ⅓ of Penn students join the Greek system. Social life centers mainly around frat parties on the weekend, but there is plenty to do for those who don’t join the Green system. As an ivy league institution, Penn is Division I. The football team’s success helps with school spirit. The football stadium is part of campus and Saturday football games are a favorite weekend activity. Overall, sports are competitive. If students get tired of campus activities, downtown Philadelphia is an easy bus/uber ride away and offers plenty of culture, history, bars, restaurants and shopping. If you are looking for an urban campus, Philadelphia is an under-rated city, in my opinion, and a great size (big, but not too big). New York and D.C. are also easy train rides away.