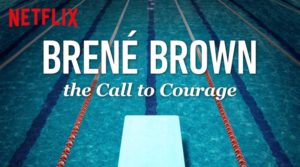 I watched Brené Brown’s Netflix show last night. I have read (and re-read) her books and love her Ted Talk. Her show on Netflix is like a highlight reel of her books peppered with her sense of humor and great storytelling. Take the time to watch it, it’s so worth it. Of course, I can’t help but watch and think about what I can share with students, or what we as parents can share with our kids.

Brown opens the show with her story about the origin of her Daring Greatly book, and the Teddy Roosevelt quote that book is based on, it’s long, but I wanted to share it as it’s the foundation of the rest of her work, “It is not the critic who counts; not the man who points out how the strong man stumbles, or where the doer of deeds could have done them better. The credit belongs to the man who is actually in the arena, whose face is marred by dust and sweat and blood; who strives valiantly; who errs, who comes short again and again, because there is no effort without error and shortcoming; but who does actually strive to do the deeds; who knows great enthusiasms, the great devotions; who spends himself in a worthy cause; who at the best knows in the end the triumph of high achievement, and who at the worst, if he fails, at least fails while daring greatly…”

Brown’s main message is to show up and be brave. But, what does that mean?  It means showing up, being vulnerable and really seeing those around you. As parents, we need to let step back and let our kids make mistakes, get in the arena and fail and learn from their failures. “If we’re always following our children into the arena, hushing the critics, and assuring their victory, they’ll never learn that they have the ability to dare greatly on their own.”

It’s so hard as a parent to watch your kid make mistakes, or fail. But, that is the only way they learn. And, when our kids do flub, as they will, we need to be there to support them and help them learn from their mistakes. How will they take those mis-steps and turn them into success the next time around. Maybe it was a test that didn’t go as expected, an audition gone sideways because the other kids rehearsed more, or a try out that didn’t go as planned. Sometimes failing is more important than succeeding because it either changes the path or is a reset. Let your kids fail when the stakes aren’t quite so high and test this out (so hard, I know).

The other thing I loved about her message is this “you can’t take criticism or feedback from people who are not being brave with their life. People who matter in are the people who love you despite your flaws and imperfections.” This struck me as our kids spend so much time on social media or in forums where the feedback might be anonymous, or a friend or acquaintance is hiding behind a phone while giving feedback. It’s important to remind kids, especially teenagers, that the friends who matter are the ones who are being brave, who are really “seeing” them and who they’re able to be themselves around.  I love this advice: “I carry a small sheet of paper in my wallet that has written on it the names of people whose opinions of me matter. To be on that list, you have to love me for my strengths and struggles. You have to know that I’m trying to be Wholehearted, but I still cuss too much, flip people off under the steering wheel, and have both Lawrence Welk and Metallica on my iPod.” Who are the people who’d be on your list?

There is so much more good stuff in the show, I hope you watch Call to Courage and that we can all learn how to dare greatly. Watch it here.