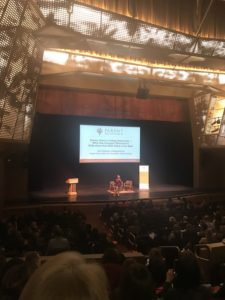 I went to a great talk last night put on by the Sequoia Union Parent Ed Series. If you haven’t attended one of their events, I highly recommend them. The topic of last night’s event was Twenty Years in College Admission—What Has Changed, What Hasn’t:

Reflections from Both Sides of the Desk. The legendary Alice Kleenan interviewed the Director of Admissions at Trinity College in Hartford, CT, Angel Perez. Alice and Angel had a ton of insightful information to share. They both have years of experience on both sides of the college application process and offered their perspectives on everything from grades to sports to the future job market and how colleges are preparing students for that. They also both are big supporters of a liberal arts education, which is music to my ears.
Many of the topics they discussed went back to this overarching theme of student stress and anxiety (both in high school and college). On that theme, one of the movements Trinity has been supporting is the de-emphasis of taking the SAT or ACT; in college application terms is called test optional or test flexible colleges. Test optional schools leave it up to the applicant to decide whether they want to submit their test scores. Test flexible schools have different policies dependent on the school, but they might allow the student to submit other academic results other than the SAT.  According to Alice and Angel, 20 years ago there were 300 schools that fit these descriptions. Today there are over 1,000 test optional or test flexible schools. Many parents have the mis-perception that these are schools that are not rigorous or competitive. You’d be surprised at the list of schools here. (You can sort by state or print out a pdf file).
The whole idea of standarized tests is to give colleges a benchmark to judge a student’s readiness for college, and provide colleges with one common data point that can be used to compare all applicants. However, there is much evidence that shows that  students that come from wealthier families perform better on this test. “Research has proven that high school [grade point average] is a stronger predictor of success in college than are standardized test scores,” accoring to Angel Perez. In addition, for students who maybe aren’t great test takers it can be a source of incredible anxiety and stress…which goes back to the original point. Check out the list, there are many very competitive schools on there. For one data point, 55% of Trinity‘s freshman class this year were students who opted out of the SAT. Proof that lacking test scores doesn’t hurt you in the admissions process.
(As a sidebar Trinity is a beautiful historic school in the capital of Connecticut; it’s a great school for students who want a small liberal arts college and an urban campus)